Forecasting the social value of Thrive – an Executive summary

Following almost two decades of development by its co‐founders, the Thrive approach has been systematically implemented in UK schools since 2009. Over the years there has been a growing recognition of its value by a wide range of professionals and stakeholders, although this value was not being captured in a systematic way.

In addition to demonstrating the value of the approach to society, Thrive also saw the need for a framework which would provide a foundation for future evaluations of Thrive as its prevalence in schools,  learning communities and country‐wide strategies increased. Given these requirements, an appropriate method to explore the outcomes of Thrive and to establish a measure of value for its activities is a Social Return on Investment (SROI) framework. This is a Government‐recognised methodology that has been developed from social accounting and cost‐benefit analysis.

SROI is a framework for measuring and accounting for the broader concept of value and it aims to measure change in ways that are relevant to the people or organisations that experience or contribute to it. This allows decisions to be informed by the full significance of impacts, and not just those things that are easy to measure or value.

The project set out to produce a forecast SROI that would predict the magnitude of social value created if the activities met their intended and observed outcomes.

In addition to providing a framework to inform subsequent evaluative work, the project would also be useful to Thrive in a number of areas. Namely, it would: 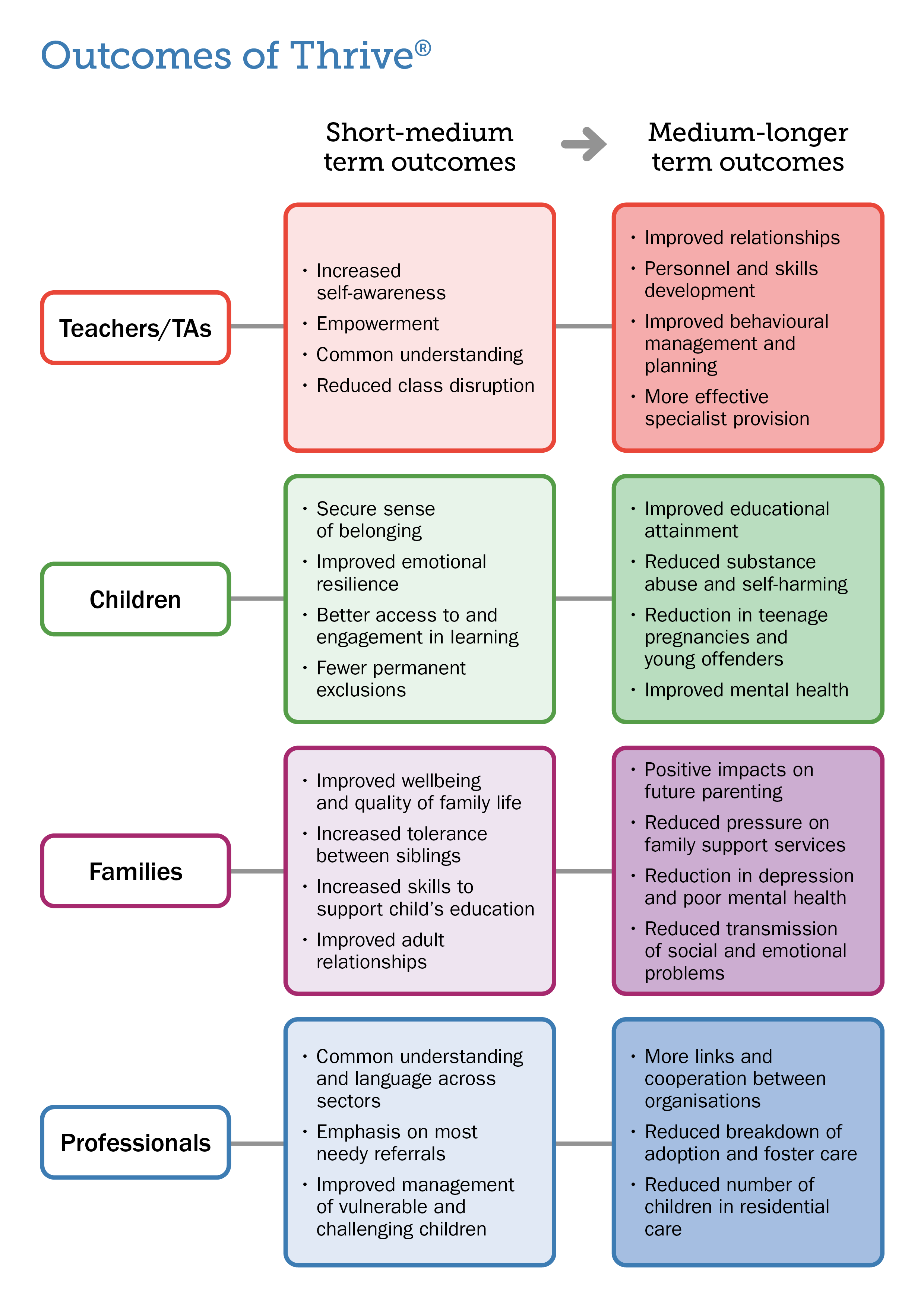 Phase 1: Developing a Theory of Change for Thrive

Given that at this time there was little documented evidence on the outcomes of Thrive, the first phase was very much exploratory in nature. The focus was around collecting in‐depth qualitative data which would provide a narrative, with supporting ‘stories’ of how Thrive impacts on the world over the short, medium and longer term.

An initial exercise clarified the scope of the project and identified the types of stakeholders that may experience material changes as a result of Thrive. Semistructured in‐depth interviews were undertaken with selected stakeholders, including teachers (primary and specialist), head teachers and educational psychologists. Although precise questioning varied depending on the nature and context of the interviewee’s setting, it focused primarily on the outcomes they had witnessed, or would expect to, over varying time frames. As well capturing stories around the outcomes of Thrive, the interviews aimed to draw out the various contexts, nuances and complexities relating to the implementation of Thrive. This process facilitated the development of a Theory of Change (ToC) for Thrive. It comprised detailed analyses of the various outcomes as they occur over time, presented in diagrammatic form and supported by the in‐depth narrative. This proved integral to understanding the value of Thrive to society, and in turn the development of the ToC.

Outcomes were identified for four main groups of stakeholder:

The principle outcomes for these four groups revealed through the exploratory work are summarized below.

Phase 2: Evidencing and valuing the outcomes

A central focus of the stakeholder consultation in the second stage was to gather measurable evidence on the salient outcomes identified through the Theory of Change. Measures were sought not only for changes that have been witnessed or perceived by those involved in delivering Thrive, but also for those outcomes that have yet to come to fruition and where a logical chain of events can be foreseen.

Attempting to collect data directly from children, parents and families was beyond the scope of this study due to resource and ethical constraints, and so information relating to changes for these groups was gathered from the above stakeholders.

Three versions of a survey instrument were administered by telephone and targeted at each of the respective stakeholder groups. Data was gathered principally through Likert‐type questions where respondents were asked to rank the extent to which they agreed or disagreed with a series of statements relating to impacts of Thrive on the four main stakeholder groups. Interviewees were also questioned about what would have happened anyway without Thrive, and the extent to which observed and anticipated outcomes could be attributed to Thrive as opposed to other interventions or initiatives.

Central to the SROI methodology is the monetisation of outcomes in order that they can be measured in a consistent way using a common currency. The resulting impact can then be set against the initial investment and a ratio of benefits to costs produced.

Approximations of financial value were sought for each outcome drawing on relevant secondary sources such as those detailing standard costs for social and health care provision. These were used to assess the significance of the outcome to an individual, society or the state, and thus allow comparison with other outcomes.

Outcome values and proxies were assembled in a discounted cost‐benefit analysis to calculate the present value of benefits which takes into the account the future value of money. By dividing the discounted value of benefits by the total investment, it was then possible to arrive at a ratio that indicates the financial return to society for every pound invested in Thrive.

A number of scenarios were modelled to produce a confidence range of ratios accruing to the short‐medium term (yrs 1‐5) and the medium‐longer term (yrs 6‐10). A combined range was also produced to indicate the likely return to society over a ten‐year period.

The SROI model estimates that between £7.70 and £9.06 of value for society is generated for every £1 invested in its implementation. When longer‐term outcomes are taken into account ‐ including reductions in social and emotional problems later in life as a result of exposure to Thrive in childhood ‐ the potential return rises to between £16.50 and £22.00.

The considerable potential for Thrive to deliver tangible returns to society through a range of diverse and inter‐related outcomes, and in many cases associated savings to the State, is consistent with both the qualitative narrative and empirical estimates. The magnitude of these estimates is also consistent with the gravity of potential outcomes revealed through the Theory of Change.

To read about the context behind the Theory of Change for Thrive, please click here. 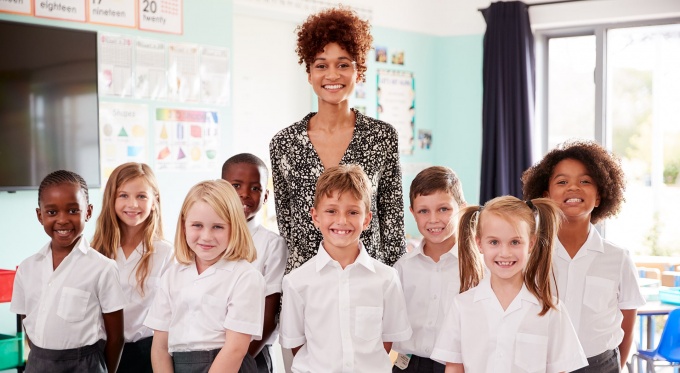 Hagley Primary School has been named as a School of Excellence and praised by Ofsted for the role it plays in supporting the wellbeing of its pupils. 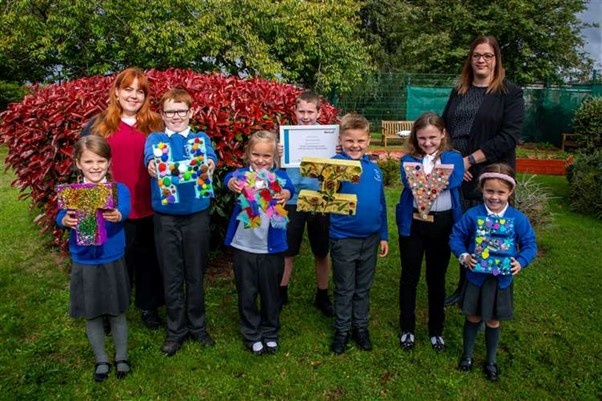 #ThriveImpact - 'Relationships are key to resilience'

Bilsthorpe Flying High Academy has been recognised as an Ambassador School by Thrive for its support of pupils' emotional health and wellbeing.

Praise from Ofsted for Thrive School of Excellence

Voyage Learning Campus has been named as a School of Excellence and praised by Ofsted for the role it plays in supporting the wellbeing of its pupils in order to build resilience and help prevent mental health issues.

Fixed term exclusions have dropped and staff morale has improved at a North Somerset primary setting after it placed the mental health of its pupils at the heart of school life.